I was itching to get out this weekend, but the weather forecast wasn’t looking good. Sunday was OK, but I had too many things on the go, so Saturday it was as SWMBO was taking the ‘ankle-biters’ to the city. I was thinking it would be fun to have some company, but who to call?! Getting to know Al on our ride last weekend, it struck me that being an ex skateboarder/surfer he may lack just enough sense to join me. And on cue, who pm’s me looking to ride, but Al. I sense ‘bromance’ in the air. 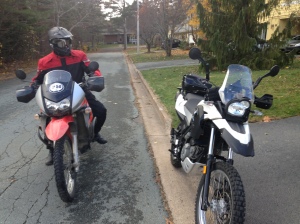 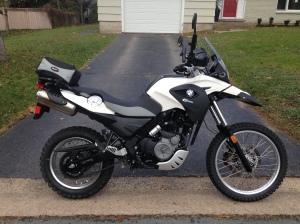 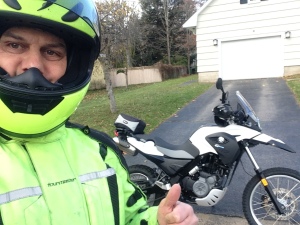 The morning was cold, and I mean cold! Or maybe I’m just getting softer in my old age. I had to wrap a few things up at the office and we didn’t get going until almost noon. We headed towards Petite Riviere by way of some dirt roads since the Sertao was too clean. We stopped in Mill Village at the general store for a coffee, Snack and conversation. After, we took the Mill Village/Medway River Road toward LaBelle. 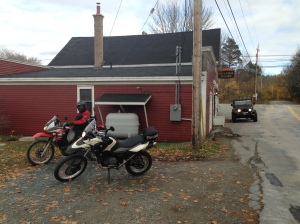 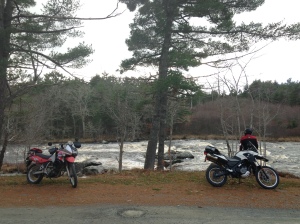 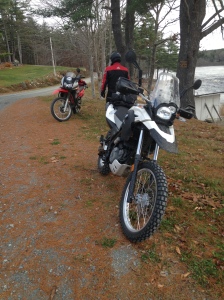 Getting further into the Labelle Road we encountered a fair bit of snow and it got colder. I was worried about ‘no heated grips Al’, but never heard a complaint, he’s tougher than me for sure. I remember a time when cold didn’t bother me, but I digress. By the time we got to the end of the LaBelle Road, the sun was getting low and Al did mention his hands were starting to feel the cold (I didn’t want to admit that I was looking forward to a hot shower). So back we can to Bridgewater via the 325 I believe. 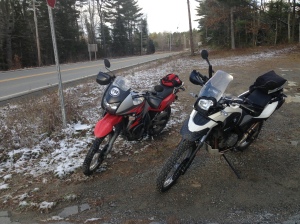 It turned out to be a great day for a ride despite the cold. The only casualty was my disappearing right side BMW badge. Apparently it’s only held on by adhesive which died in the cold. Oh well, I’m sure it’s covered by warranty. Thanks to the rideatlantic/NSDSC sites I was able to connect with yet another great riding buddy lacking sufficient brain cells to ride despite the conditions – January’s looking good!